Research Vessel with a long history gets salvage treatment from Ballard

Ballard has been contracted by the Washington Department of Natural Resources to salvage, remove, and dispose of the R/V Hero (USCG # 684718). The vessel is a single screw, wood hulled research vessel built for the National Science Foundation by the Harvey Gamage Shipbuilders in 1968. The Hero sank in the Palix River near Willapa Bay on March 7, 2017. The vessel has a reported overall length of 125’, a beam of 30.5’ and a draft of 15.5’. Due to the vintage and size of the vessel, it is presumed that asbestos-containing material (ACM), lead paint, and PCBs would be present.

Ballard has set up a large containment boom around the vessel to catch debris and potential contaminants. Ballard is utilizing a crane barge to help dismantle the Hero and a material barge to process the debris into pieces that are being loaded into 30 yard contains than disposed of. We also have one large excavator on the material barge that is also being used in the demo of the vessel and processing of the debris. On the other end of the material barge we are using a smaller series excavator with a shear to also process materials into the appropriate container for recycling and disposal.

We are also taking steps to preserve the historical significance of this vessel so when the job is done we can work with museums interested in artifacts recovered. The project was contracted  late 2021 and will be completed in late 2022. 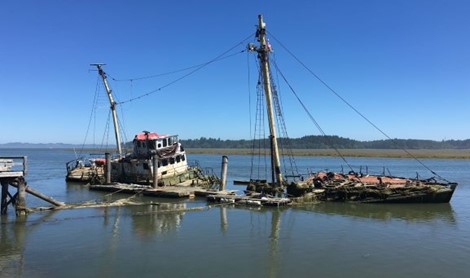 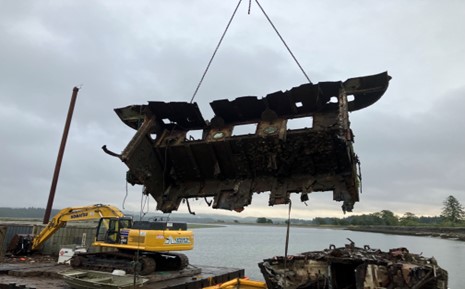